Few things in our history draw people together the way that professional sports do. Stadiums fill to the breaking point with roaring fans dressed in memorabilia, each ready to cheer their team to victory whilst casting aspersions on the opposing team’s parentage. From the earliest Olympic Games some seven hundred years before the common era to today’s mega-events, competitive sports have been a cultural staple for all of living memory. In the modern era, broadcast sports generate more than twenty-two billion dollars a year in the United States alone.

The task of broadcasting these events, replete with live commentary, instant replays, and information graphics is an enormous undertaking. Recently, I had the pleasure of sitting down with Local 695 member Edgar Lopez, an EVS Operator who was kind enough to share some of his experiences working sports broadcasting

Edgar grew up in Anaheim and later studied television at Chapman University, where he fostered ambitions of becoming an editor. Despite enjoying the creative process of the craft, the slow and meticulous process of cutting content in a nonlinear editing platform proved tedious to him. Opportunities soon emerged in the world of sports, however, where Edgar first learned of the position of EVS Operator—a job which allowed him to edit content in fast-paced environments. After graduating, Edgar found opportunities substituting for other operators in weekly sports working for the NFL, NHL, NBA, and NASCAR. Coming up in Orange County, however, Edgar and his family had always supported their local teams—the Anaheim Angels and the Anaheim Ducks. Therefore, it seemed fitting when he was asked to become one of the lead EVS Operators for both teams, positions he has now held for over ten years. “It’s kind of surreal,” he told me. “My brothers and my family are all sports fans and they’re always talking about the games or specific plays that I was there for.”

Though critical to live events and sports broadcasting, the role of the EVS Operator is not as commonly understood as those of our brothers and sisters in production sound. These technicians are tasked with a variety of responsibilities and are often simultaneously responsible for juggling large amounts of data, recalling and cutting content moments after it occurs, sourcing clips for playback. The job is one- part tape operator, one-part editor, and one-part playback specialist all at the same time. At the heart of the operation sits the EVS media server, which Edgar describes as being like “a DVR on steroids.” This digital video production system is capable of recording, editing, and playing content from a wide variety of sources and in an equally wide variety of formats. The current line of XT media servers can support up to sixteen channels of HD video, ultra-high-definition resolutions of up to 8K, HDR encoding, and both traditional SDI-routed signals or those from a network-based IP source.

In a sports environment, EVS work can become hectic. The randomness of chance that makes sports so exhilarating to fans poses unique challenges to those broadcasting them. Games often require a dozen or more cameras in order to achieve proper coverage and all of those feeds need to be ingested. Instant replay packages need to be generated and rolled out before the moment of opportunity passes. New content must be generated in direct response to the game itself. In complicated environments, this can require teams of EVS Operators working in tandem with one another, each responsible for their own set of feeds but cutting and distributing packages for communal use.

“It’s not easy. It’s really hard,” Edgar told me. “We’re human. We make errors. We try to be perfect but mistakes happen. We don’t always see everything. For the first few years, it’s difficult to build up to the speed or know what kinds of footage producers might be looking for. Then, once you’re there for a while, you start to know what to expect and you have a Plan B in case it comes down to the wire. Experience prepares you best for any situation. If a home run happens, we’re usually editing it as the player’s rounding the bases so we have it ready to go.”

Despite the difficulty of the job, Edgar was quick to share many positive career-defining moments as well. The most significant came following the death of Tyler Skaggs, an Angels player who passed away in 2019.

“The game following that day was very difficult for everybody. You get to know the players pretty closely and it’s always hard to lose such a good guy. But we came home and they were having a big ceremony at the Angels Stadium. All the players were wearing his jersey. His mom got to throw out the first pitch. And at the end of the night, the team got a no-hitter. They all started taking off their jerseys and throwing them on the mound. It was just such a perfect baseball moment. It was like a dream for the Angels and all of us. And we all felt like we did a really good job at the end of the night. We felt like we represented the team and the player, so we were all pretty proud.”

It goes without saying that the world of sports was heavily impacted by the COVID-19 pandemic. In March of last year, sports seasons saw unprecedented disruptions as teams that had played through fire, storm, and flood were forced to return home. Stadiums that had once been filled with screaming throngs of fans sat in silence. The Summer Olympic Games were postponed, a disruption not seen since the cancellation of the 1944 Games during World War II. SoFi Stadium, finally complete after four years of construction, celebrated its inaugural games behind closed doors without any fans present. As one might expect, this impacted the jobs of those working in sports broadcast.

“There’s a lot more remote work now,” Edgar told me. “You were already starting to hear people saying, ‘Hey, this could be done remotely,’ but no one was willing to try it. Then last year, everything shut down. People weren’t allowed to sit in a truck for ten-hour days. What’s the solution? Well, we could try doing it remotely.” This was achieved by sending EVS controllers home with operators, who could then wirelessly access their machines at work and remote control them from home. This allowed productions to build their video infrastructure in a singular location and allow remote workers access rather than sending expensive encoding servers home with each operator. “The feeds aren’t as good though,” Edgar commented. “The biggest issue with remote work right now is the delay. The video they send home to you is compressed and isn’t as high quality as in the truck, which they do so there isn’t a major delay. But sometimes it still gets to you like a second late. So if we need to freeze the video, we aren’t really freezing it at the exact point because of the delay. When I hit stop, it takes a split second for the signal to get back to the truck. It’s not exactly frame accurate.”

These changes brought about by the pandemic have been positive for Edgar, who hopes to see remote work continue going forward. “Before COVID, I was traveling with the Angels and the Ducks. I’d be on their planes and stay in their hotels. If they were playing in New York, I’d fly out, do all the games there, and then move onto the next city. Now it looks like I won’t need to travel as much anymore. I get to stay home, sleep in my own bed, and see my kids every day. I have an eight year old and six year old. I’ve been home for the last year and now when I’m gone, it’s sad for them. It’s sad for me. So hopefully with this remote stuff, I can be home and spend more time with them.”

I would like to thank Edgar for taking the time to sit down and speak with me about his job, his career, and his family. More importantly, I’d like to extend a sincere thanks to him and all of his colleagues for bringing us our games week after week, year after year, and fighting to continue doing so even in the midst of a deadly virus. As we head into fall and turn yet another corner in the story of this pandemic, the world of sports has come back to life. Fans have returned to fill their stadiums with the cries of jubilation and frustration as they watch their teams go head-to-head. The now inaccurately named 2020 Summer Olympic Games are behind us, reinvigorating spirits of sportsmanship and competition across the globe as we look toward next year’s Winter Games. 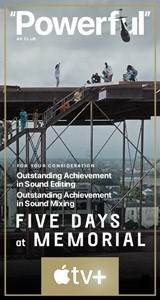