It sounds somewhat ungrateful to complain about being nominated for two films in the same year. Though I was honored to receive both BAFTA and Academy Awards for Gravity, a part of me was disappointed that Captain Phillips has not been equally recognized. 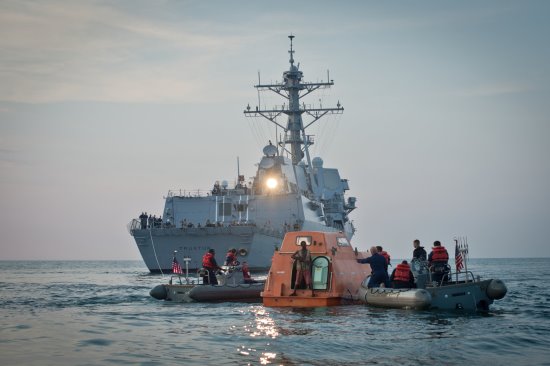 These are two very different films with different challenges for production sound. Gravity was completely different from anything I had done before, whereas Captain Phillips is a prime example of how drawing on previous experience enables us to be better at what we do. Having worked with Paul Greengrass on United 93, the film about the terrorist takeover of a passenger jet on 9/11, I knew that Paul likes to shoot in a documentary style, with no rehearsal and a lot of improvisation, and to cast non-actors in key roles. When I came to work with Paul again, on Captain Phillips, this experience was vital but we now had the added issues of shooting at sea on a container ship, a lifeboat and in the Somali skiffs. 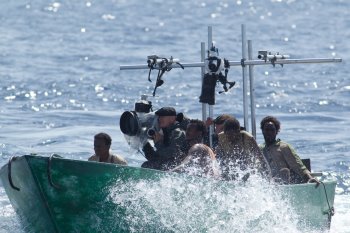 Having worked on five James Bond films, I was no stranger to action sequences involving water, especially the boat-chase sequences on Quantum of Solace filmed in Panama. On Captain Phillips, I needed waterproof lavalier microphones that also sounded good out of the water so I chose to use Da-Cappo DA04s (now Que Audio performance series in the USA). These are very popular in theater because of their very small size but have great waterproof qualities due to the inlet size being smaller than a droplet of water. I mounted them upside down so that no water settled on the microphone. I had to develop a system for getting longer range reception for recording in the high-powered pirate skiffs. I used Audio 2040 mini-tx radios in aquapacs on the pirates. The receivers were built into secret compartments in the skiffs where audio was recorded and re-transmitted to the bigger boat that we were all on. We were regularly recording up to 16 tracks and feeding a mix to Video Assist, the Director and Camera Operators. I recently wrapped on Heart of the Sea, with Ron Howard where again I was able to use what I had learnt. Months before I started on the film I said to the boat builders, “I need you to build these secret compartments…” 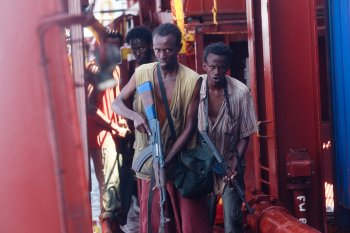 On Captain Phillips, we were based in Malta on a container ship, which was our studio for much of the film. Each department had a base in one or more of the containers to store equipment and carry out any maintenance. We still needed to be highly portable as we would shoot inside the ship, perhaps in the engine room or cabins while heading out to sea and returning to port, and shoot on decks and the bridge when at sea. There were a lot of stairs, and some passageways were very narrow. Generally, we were shooting multi-camera without rehearsals and all with improvised dialog, sometimes with the scene playing out between several groups in different parts of the ship. 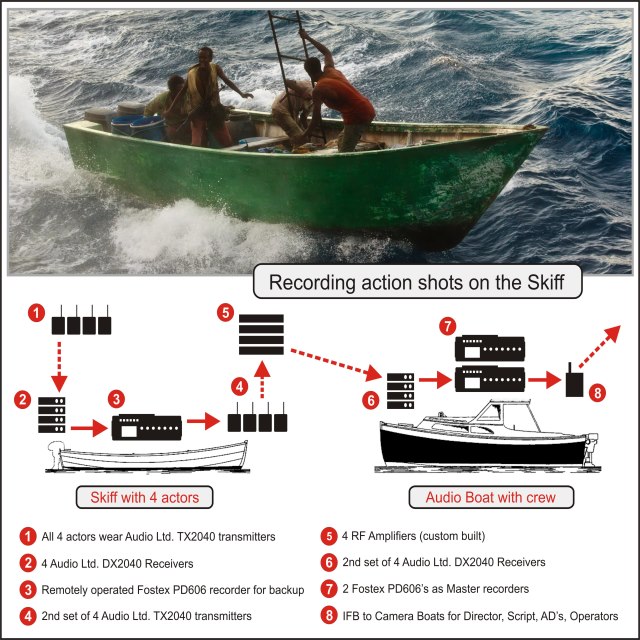 We were limited in the number of crew on the ship, but I was very fortunate to have a great crew with my usual UK Boom Operator, Steve Finn, and tech support from Jim McBride. Tim Fraser recorded 2nd Unit in Malta and in Morocco, and Pud Cussack looked after Boston and Virginia. 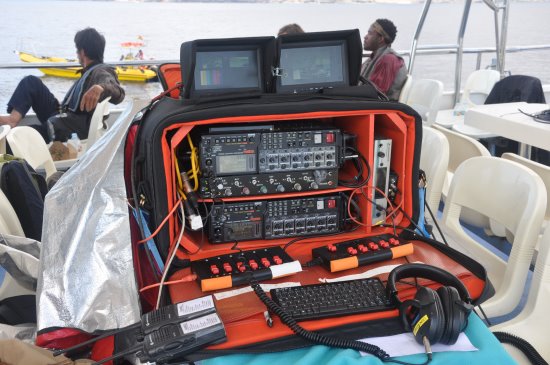 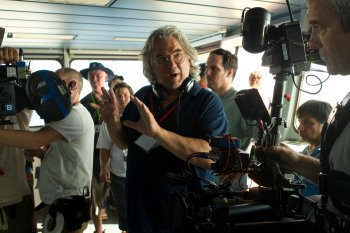 Oliver Tarney was Supervising Sound Editor. I had also worked with him on United 93 and the two Sherlock Holmes films with Guy Ritchie. One of the best things we were able to do was to get Oliver to spend a weekend with us on the ship recording sound FX. Not only did he get the FX that he needed, but he also got to experience the ship and to understand how it should sound at sea and its geography. He also got to experience being in the lifeboat—known by us as the vomit vessel—certainly not a pleasure craft! 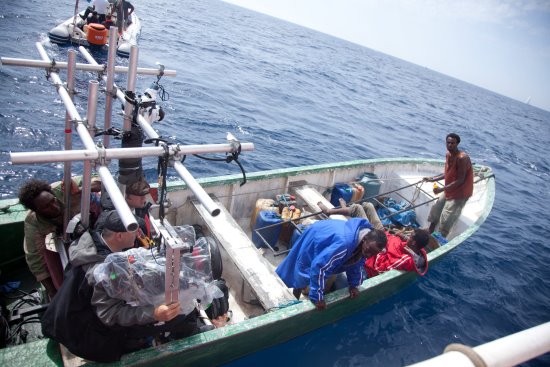 Chris Burdon and Mark Taylor were Re-recording Mixers; I’ve worked with both on previous films.

Gravity was a completely different experience from anything I had previously worked on. When I first got the call and was told that there were only two actors in the film and that there is no sound in space, it sounded like the perfect job! Then when I met Alfonso Cuarón and he started to talk about his ideas for the film, I was hooked and immediately knew that this was going to be something special. Every few years there is a film that breaks the technological boundaries— this year it was Gravity. The first issue was that both the cameras and the actors could be on robotic arms. I had recently shot a small sequence with these and knew that, although the arms could move with not too much noise, the associated power supplies and controllers were very noisy. So the first job was to negotiate that these could be extended and built into blimps far away from the action. 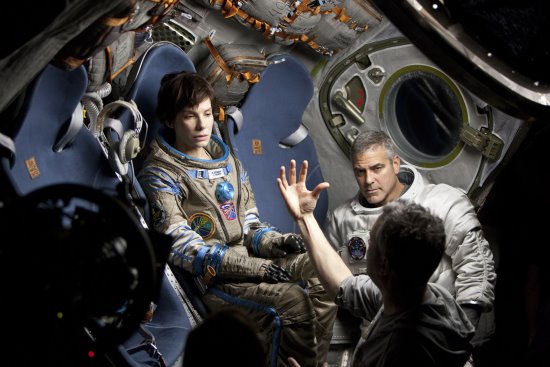 We had a very comprehensive previz of the film that we worked to. The previz helped us keep the VFX elements, still being designed, in sync with lighting, camera moves and sound. I had originally thought that we might be able to lock everything to the same timecode but, for a number of reasons, timecode wasn’t always practical as the controller. Touch Designer was used to control the robots and as a visual platform, sending midi triggers for us to sync to. 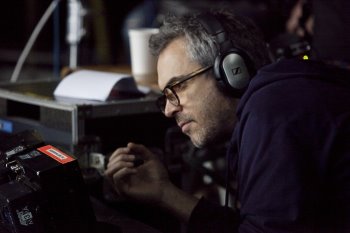 Alfonso Cuarón originally had a plan for all of the radio conversations and OS dialog to be live, and we had planned to have different rooms in the studio for those to be performances. However, due to artist availability and other issues, this proved to be impractical so we prerecorded as much as we could. Most of the pre-records were guides that were re-recorded as ADR in Post Production.

Will Towers was our Pro Tools operator. He made loops of the lines that we could play from a keyboard. The idea was that each line was on a separate loop, and there were alternative performances available for the on-screen actor to react and interact with. We would use different performances and adjust the timing for each take to create spontaneity while still having to be sure that certain lines were occurring at the correct frame space allocated in the previz. All film is a collaboration, but on this film I was collaborating more with VFX and the actor than ever before. It was also necessary for us to work very closely with Editorial as the film took shape and timing parameters or dialog constantly changed.

Here was another opportunity to use the Da-Cappo microphones— this time because of the very small size. The microphones used were a mixture of a Da-Cappo capsule that Jim McBride, our tech support engineer, had fashioned to an arm connected to the inner helmet and a latex shield that we made for both visual accuracy and to reject noise from outside the helmet. A second Sanken COS-11 was sewn into the inner helmet as were earpieces for communication. We also had in-ear molds made for some scenes. Each different piece of headgear that Sandra Bullock wears in the film contained practical microphones and earpieces. Even the classic Russian headset that she uses at one point has a built-in transmitter and receiver. We achieved this by borrowing bare 2040 mini-transmitter boards from Audio Ltd. and building them in to headsets.

I used a Cedar DNS1500 during shooting to reduce some of the fan noise from the LED lighting rig and the robotic arms. This was only on one mix track. The iso tracks and another mix track were left unprocessed.

The communication system could rival NASA Mission Control at Houston. In addition to feeding scripted lines that the actors would respond to, we also played atmospheric sounds to Sandra to set the mood for each sequence. Additionally, we played loops of her breathing from the preceding or following shots so that she was able to get the correct breathing rhythm for the shot. Often the shot could start at one pace but finish with breathing at another pace so it was important that we were able to give the correct breathing rhythms throughout the shot.

The Director and the 1st AD needed to be able to communicate with the actors and DP, Camera and other departments without distracting the actors when giving technical cues. The costumes and helmets so completely isolated the actors that they needed an audio feed both to hear each other and also to hear their own voices. Allowing them to hear themselves, but at a reduced level to avoid distraction, required a second layer of IFB feed to each.

Sandra Bullock and George Clooney could often be in rigs for hours on end so, as well as providing a system for them to communicate with each other, I also ran a kind of mini-radio station to play music, YouTube clips or anything to keep them entertained between shots. Sandra Bullock has often said that she had never previously had such interaction with the Sound Department yet we were at opposite sides of a dark stage for weeks on end. It was during one particular break during shooting that I discovered that both Sandra and George knew all the words to “Rapper’s Delight” and could sing a pretty good version!

You could be forgiven for thinking that most of Gravity was created in Post Production but, in fact, much of the shooting was oddly conventional. We had six weeks of pre-shoot, 12 weeks of principle photography and two weeks of additional photography, all with sound. Some of the sequences were shot on actual sets and boomed! For every shot, the DP concentrated on the camera angle and how the actor was lit. The Director concentrated on getting the performance that he needed and the Sound Department concentrated on capturing that performance the same way that we all do on every movie.

Previz Essentially an animated storyboard, a previz video shows a rough rendition of all the elements and special effects in a sequence so every department can see how it all fits together.