Recording Sound For Edge of Tomorrow

The first challenge for us was keeping up with the man! He doesn’t waste a second; he walks onto the stage, barely breaks step to have a mini-pit stop where he sits on a wooden box (no artist’s chair for him) while hair, makeup, costume and sound all do their finishing touches and bam!—he’s off again onto the set and straight into the scene. We needed to be there, like coiled-springs ready, to wire up this man or be left behind.

Matching pace with Tom Cruise (TC) as he powers his way through the project was just one of the elements that made work on Edge of Tomorrow exciting. Quite a bit of the action of this film, directed by Doug Liman and co-starring Emily Blunt, takes place on the battlefield. The brief is that Cruise, Blunt and their squad would be airdropped onto a beach in the middle of a huge battle and have to fight their way inland. The battlefield was full of shell-hole craters, mud and water. Multiple cameras, simultaneously stationary and handheld, would cover action that would include partially improvised, seven-way dialog that ranged from quiet muttering to full-scale yelling. Oh, and they would be wearing full-body armor, called Exo-suits, with weapons mounted on them and constructed from dozens of parts with several articulated joints.

The elements we faced included:

• The Exo-suit body armor could be noisy when they moved around.
• There was little chance of getting a boom microphone anywhere near.
• There would be wide shots for action and scale at the same time as intimate shots between the soldiers.
• The explosives and gunfire were going to be loud.
• The weather was set to be wet and windy. 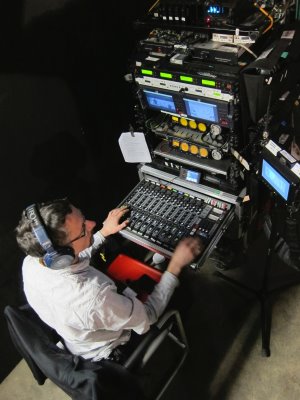 It’s enough to set any Sound Mixer’s alarm bells ringing on multiple fronts although the bells were largely inaudible over the din of the action.

I decided I had to get at least one wireless microphone, if not two, working on everyone at all times—and they had to work well! It’s my first time to work with Tom Cruise and I have the impression he’s not going to want to spend much time getting his microphone fitted and finessed every day.

I looked at the designs for the armor suits and consulted with the Prop-Modellers to find a way to build microphones into them. That way when Tom Cruise was in costume, he would already be mic’d.

Working cooperatively with Pierre Bohanna, James Barr and their crew, we built a box to be fitted on the front of the Exo-suit. The box was drilled out to make space for a lavalier with a furry windscreen that we concealed behind a mesh screen, and painted to match the Exo-suit. We found that even a millimeter of variation higher or lower in the mount made a huge difference to the coloration of the sound, so it was critical to have them precisely vertical and positioned as high in the box as possible. At the end of each day, we would open up all the boxes to dry them out and make sure there was no slippage in the orientation of the microphones inside. 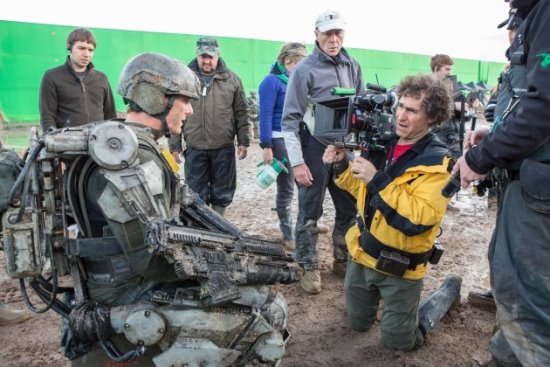 We also fitted microphones in the helmets to help us cope with the huge dynamic range of the performances and give us coverage when a shell blast threw a load of wet debris on top of the chestmounted boxes. We did have a couple of microphones destroyed during the shoot but, all in all, they survived pretty well. 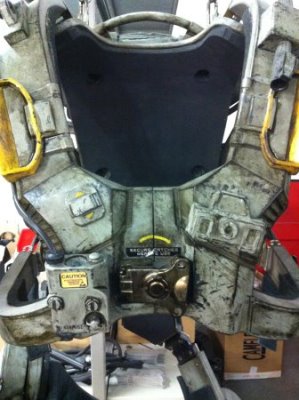 The team who built the Exo-suits was responsible for getting the actors in and out of them every day, making necessary adjustments and keeping them all working smoothly. They were a crack team, and ready with a can of oil to prevent squeaks.

One of the important sets was a ‘Drop Ship,’ a troop-carrying aircraft that was built on a gimbal suspended from the roof of the stage. The actors were all hooked on with restraint wires in an upright position, already in their body armor, ready to be dropped when bomb-bay-type drop doors opened beneath them. They then dropped fifteen feet for real before being held by the wires.

Once the doors were closed and the access steps slid away, no one could get in or out. We built a PA system inside using some rugged horn speakers that would look right on-camera, so the Director or Assistant Director could communicate with the cast.

This was a phenomenally noisy rig, built twenty feet above the ground. There was no possibility of reducing the noise of this rig, but it sounded quite in keeping with the big machine it was supposed to be, so the best thing was to go with it. We suspended a couple of Schoeps omnis from the ceiling to capture FX in sync and all the clanking, groaning and motor noise of the ship sounded great. These microphones were placed away from where the dialog was happening so they could pick up a continuous track of FX (recorded on discrete tracks) which could cover and blend edits from one shot to another. This recording was used to help keep the sync dialog usable.

I had fun putting a homemade contact microphone (from the Sound Artist/Field Recordist/Composer Jez Riley French) directly on the huge winches that drove the motion of the rig. That gave some really interesting low-frequency tones and clunks to add into the mix at the dramatic moment the drop-doors swung open. A benefit of the noise level was that the actors had to yell their lines, keeping the balance of voice to noise usable. Again, we used two microphones as much as possible, one in the helmet and one on the chest. We used Audio Ltd. mostly and Zaxcom for the really loud voices. 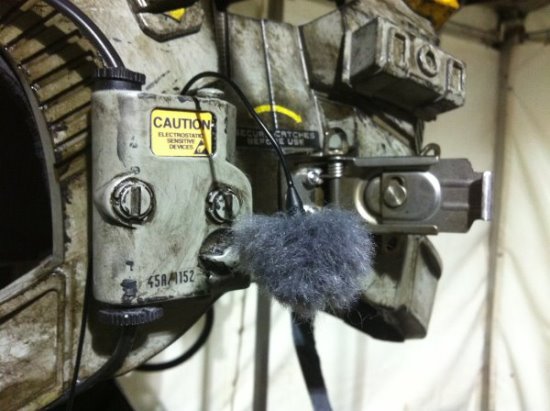 There are many benefits to working with an actor like Cruise, as he is aware of all aspects of the process, including a sensitivity to sound. When he walked onto a barracks set that had plastic interlocking floor tiles and said they were a bit noisy to walk on, the Art Department had to find a solution. There must have been around four hundred tiles in that floor and they put three men on the job of filling each of the thirty hollow sections on the underside of EACH moulded plastic tile, with silicon glue and precisely cut pieces of carpet. I’d like to imagine that would happen if a Sound Mixer made a comment on a noisy floor! 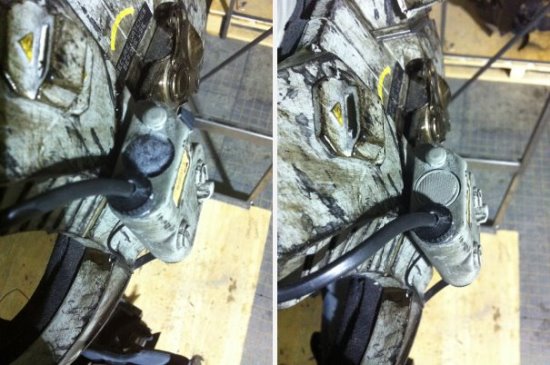 A scene landing a helicopter in the middle of London’s Trafalgar Square, one of the main focal points of the city, presented another challenge. Nothing of the sort had ever been done before and the shot necessitated closing down the entire area for the morning. TC was to board the helicopter in another part of the city where Boom Operator Orin Beaton would put the microphones on while I set up with the filming unit in the Square. The plan was that, as the chopper landed, TC would step out, immaculately dressed in his U.S. officer’s uniform, flash that famous smile, meet up with a waiting British officer, and they would talk as they walked to a waiting car, get in and drive off. 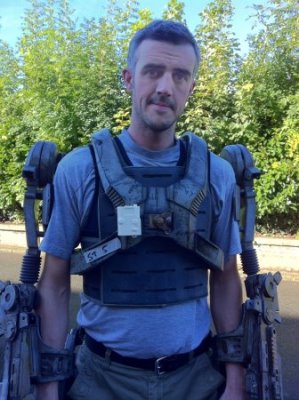 I had told TC that I wanted to put two wireless microphones on him for this scene, one set to a high level, the other set low and in two different frequency blocks in case of any unpredictable interference on the day. He was open to this idea but wanted to test it a few days before, to see that it could be done without affecting the immaculate look of the costume. I was grateful for this as the shot was nerve-wracking enough. The cameras would be rolling from the moment the chopper appeared in the sky until they drove away in the car at the end of the scene—it had never been done before, we might get only one shot at it and we didn’t want to risk a visible sound pack spoiling the shot. We put the microphones on, mounted the packs on the ankles, and pulled and flapped the trousers to make sure we wouldn’t see any lumps in the downdraft of the helicopter blades. When TC gave the thumbs-up, we were good to go and it turned out to be a great scene. In the end there was a lot of RF around that morning that wasn’t present on the scout so it took an Xmas tree of antennae to bring in enough signal, but we got it! We all had to be in military costume in case we were seen from the air so we had to rationalise that we were in the Royal Engineers Corps and that wireless operators play a crucial role in modern warfare! 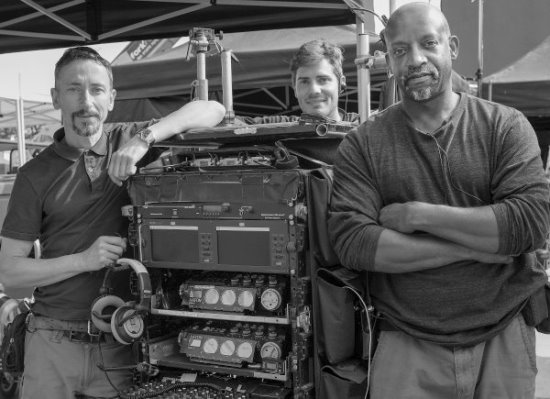 I have never encountered anyone so relentlessly POSITIVE as Tom Cruise. Every day for five months, he was always giving at least 100%. If there was anything he wasn’t happy about with the filming, he always had a good reason and whatever the problem was got fixed, which would invariably improve the shot. He’s very demanding of himself and those around him but if you do a good job, he shows his appreciation. He is absolutely in control of what he is doing in his performance and behaves like he is the luckiest guy in the world to be able to do what he does—making movies. His professionalism, talent and commitment both impressed me and took some of the edge off an assignment with more than the usual amount of trudging through mud.