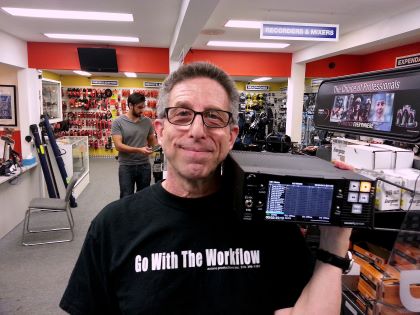 Evolution/Revolution:How we got to now When I began mixing some forty-four years ago, we shot on film with one camera. A second camera only came out during big stunt work scenes. I mixed on a mono Nagra; recording to ¼ audiotape and the production track I delivered to editorial was THE only track of dialog.

Production changed in the ’90s when two cameras were used for every setup. This usually meant simultaneous wide and close shots. Suddenly, we were using more wireless microphones and there was a need to have both mix and iso tracks of each wire in use.

There were several professional twotrack audio tape-based recorders available then: the Nagra and Stellavox. DAT recorders from Fostex, Stellavox (the Stelladat) and HHB soon supplanted the analog machines and some enterprising Production Mixers embraced the technology of the music industry and started to use the newer eight-track recorders, either the Tascam DA-88 or the Alesis XT-8.

When Zaxcom, led by Glenn Sanders and Howard Stark, introduced the first portable four-channel hard-disc recorder in 1996, it revolutionized location recording. Sound Devices brought out their version of a nonlinear recorder in 2003 and we’ve rapidly come to the present where eight channels is the minimum. Some shows now expect to have individual tracks available for everyone in the cast and even eight tracks may not be enough.

I use a Yamaha 01V96 console (since 2004) and have always wanted to be able to record up to sixteen tracks if and when required. Previously I could achieve that only with a kluge of eight AES and eight analog outputs. But the new Sound Devices 970, an audio-only version of the PIX 260i, offers capabilities that greatly simplify high-track-count recording. 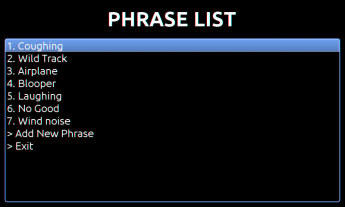 The 970 is a half rack, 2U device capable of recording up to sixty-four tracks to multiple drives. There are two front-panel drive bays and two eSata drives accessible from the rear panel. The drives may be configured for simultaneous or sequential recording as needed.

Eight line-level inputs permit connecting devices directly but full use of high track capabilities comes with connection to a mixer that can supply Ethernet-based Dante or either optical, or coaxial MADI connections. The 970 will also accept eight tracks of AES via a DB-25 connection. 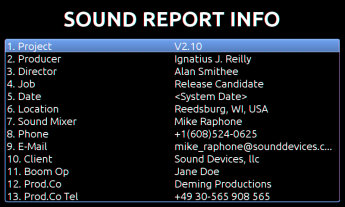 Dual power inputs through standard 4-pin XLRs provide operational redundancy. In the event of a failure of both sources, proprietary PowerSafe™ circuitry provides ten seconds of reserve and an orderly shutdown.

Sound Devices continues to use the rock-steady Ambient Recording Lockit timecode technology offering sufficient accuracy and stability for use as a master clock.

A large five-inch screen provides visual metering up to sixty-four tracks and fast, intuitive menu control. Many of the same button actions on the SD 788T are duplicated here on the front face of the 970.

For example, pressing the STOP + FF buttons increments the Scene or Slate. Pressing STOP + RW buttons allows you to delete false start takes. A window asks you to confirm the action, YES or NO, before proceeding. 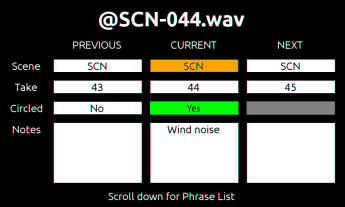 Similar dedicated keystrokes give access to the Metadata screen where scene number, takes, notes and other functions may be rapidly edited. Commonly used phrases may be selected and edited from a list manager.

By pressing AUDIO + FILES or pressing Ctrl + P on an attached USB keyboard will create a CSV file Sound Report on the current folder for all applicable drives.

The real clincher to me was the ability to use the Audinate Dante network of up to sixty-four tracks! 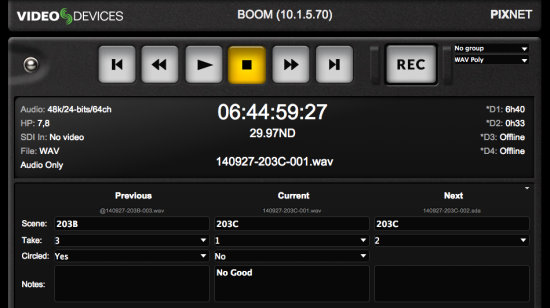 Yes, far more than I might need, but I always believe in future proofing my investment. Combined with a Dante card for the Yamaha, one Cat 5E cable gives me 16 x 16 I/O to the 970. I simultaneously record to both an SSD and CF card, which are mounted via the Sound Devices PIXCADDY and PIX-CADDY CF respectively.

The 970 also features an embedded Web-based control panel, PIXNET, for machine transport and setup control over Ethernet-based networks, as well as file transfer over the data network with SMB.

File metadata editing of scene name, take name, notes, track names and reel folders can be done across all drives during, before and after recording.

The 970 may also be controlled through an RS-422 port and GPIO (General Purpose Input/Output).

Use in the Field

I picked up my 970 in early April and, after installing it on my newly reconfigured cart, I had about two weeks of “sea trials” before beginning production on a television series in May. Having never used a PIX or Audinate Dante, I wanted to be comfortable with it well before I was on any set. This included familiarizing myself with the operation of the 970 and the routing of the Dante network.

The Dante Controller on a PC or Mac is the master for all the I/O to all the devices on the network. 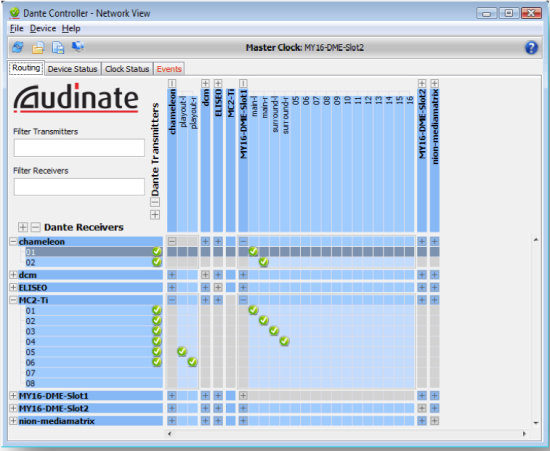 The series shot for five months and the 970 worked flawlessly every day. I powered it on about a half an hour before call and shut it down at wrap. That added up to at least twelve hours a day of constant use.

My I/O setup was built around the Dante network. As I mentioned previously, I added the Dante MY16-AUD card to my Yamaha 01V.

I run the Dante Controller from a Mac Mini on my cart. The Controller routes the I/O from the Yamaha to the 970 (and any other Dante device on the network). PIXNET also runs from the Mac. 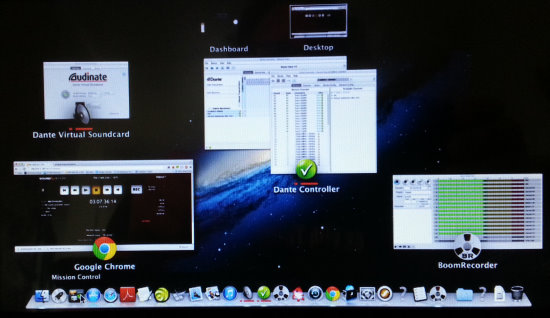 Each day I would create a new “Reel #” or folder. The 970 offers “Custom” (default) or “Daily.” Choosing “Custom” allows the Reel to be edited with any alphanumeric value. “Daily” will automatically generate a value derived from the System Date. i.e., YYMMDD. 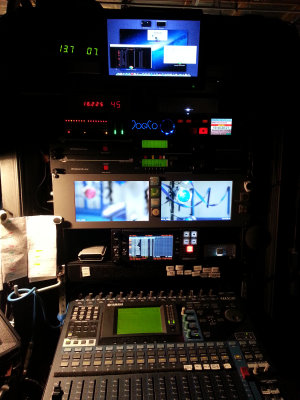 Aside from our most important responsibility of mixing great tracks, we have the added duties of accurate metadata and arming and disarming of tracks. These operations are available both directly on the 970 and via PIXNET.

Pressing the AUDIO button on the PIX and rotating the Control Knob allows me to scroll to a track. Pushing the Knob highlights my selection, for example, arm a track. Scrolling further I can edit the Track Name. These features are duplicated by an attached keyboard as well as on PIXNET.

The most important part of any new HD recorder is how it sounds; the answer to that is the 970 sounds great, like all of the Sound Devices recorders. Sound Devices is known for rigorously testing their products before introducing them for sale in the marketplace. They are also fast to respond and fix any software bugs reported by users and owners. This is a personal testimonial; they have my back. 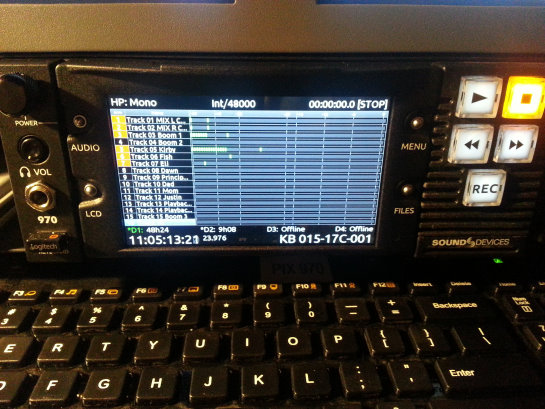 The 970 is definitely a fixed installation recorder, not a bag-type machine, as it has no on-board mixing capabilities. However, its small footprint will easily fit any cart configuration.

With over five months of daily use, I can safely say I really enjoy the 970. It is reliable, well designed with an easily accessible menu and does the job it was designed for.