A Tribute to Ray Dolby

To be an inventor, you have to be willing to live with a sense of uncertainty, to work in this darkness and grope towards an answer, to put up with anxiety about whether there is an answer. 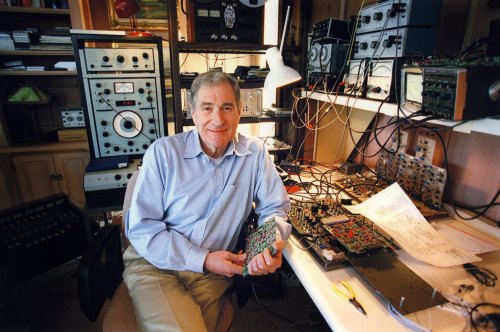 The Dolby name appears so often on films that it has become like Kleenex or Xerox, a generic for noise reduction. But the many innovations of Dolby Labs are largely the work of Ray Dolby, a man of prodigious ingenuity. He died of leukemia on September 12, 2013, at age eighty, at his home in San Francisco. Born January 18, 1933, in Portland, Oregon, Mr. Dolby was hired straight out of high school by Alexander Poniatoff of Ampex Corporation. At the time, Mr. Dolby had volunteered as a projectionist for a talk that Mr. Poniatoff was giving. Impressed by his talents, Poniatoff invited the young Mr. Dolby to come to work with him at Ampex, where he contributed to the design of the first quad videotape recorders.

After completing studies in electrical engineering at Stanford and physics at the University of Cambridge, Ray Dolby invented a system of high-frequency compression and expansion that minimized recorded hiss. He formed Dolby Labs in 1965 to bring this noise reduction system, called Dolby A, to market. Mr. Dolby later turned his attention to the problems of sound recording for motion pictures, which still relied on decades-old technology. His endeavors would lead to the introduction of a surround sound system that could be duplicated using traditional optical soundtrack printing techniques. It replaced the expensive and cumbersome printing techniques previously used for big-budget films.

At Dolby Labs he is remembered as much for mentoring a new generation of scientist/engineers as for his particular innovations. He was a scientist who expanded creative horizons for artists.

His contributions are covered in greater detail in Scott Smith’s series “When Sound Was Reel” in the Summer 2011 and Winter 2012 issues of 695 Quarterly. There is also a very fine video tribute available on the Dolby website. These are available at: