How I Spent My Summer Vacation

Editor’s note: An abbreviated version of Jim Tanenbaum’s story about his recent journey to Viet Nam appears below.  Jim’s complete, lavishly illustrated 150-page journal, detailing his encounters with poltergeists in two of the three hotels, and the novel recording techniques invented by a Vietnamese videographer which Jim has not yet dared to try is available to read in PDF format. (If photo reproduction is poor, save the downloaded file to disk and view in Adobe Acrobat.) 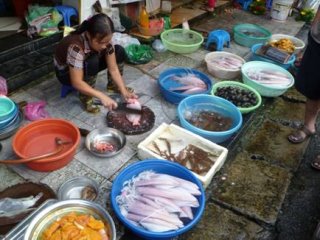 In 2010 and 2011, I spent autumn in Beijing, China, at the BIRTV (Beijing International Radio and TeleVision) trade show, courtesy of John and Nina Coffey and some of the companies they represent. I was looking forward to going back again in 2012, but alas, it was not to be. Probably because of my telling all and sundry what a great time I had before, the owner of one of the companies that defray my expenses decided to go himself instead of sending me.

Of course, I was not happy about this turn of events, as I love traveling, especially when someone else foots the bill. To me, the most interesting aspect of being in another country is the people there. Second is the food, and a distant third are the museums, palaces, and all the other touristy stuff. I do go to see those places, but they’re at the bottom of the list. However, I was looking forward to seeing the Great Wall this time.

My disappointment was short-lived, however. Soundman Steve Miller was looking for a replacement to take over his teaching position in Viet Nam, and Laurence Abrams (who creates the great diagrams for my 695 Quarterly articles) recommended me. The client was VTV (Vietnam TV), the government-run national TV network. The rest, as they say, ispho (Vietnamese rice-flour noodles, pronounced more like “fuh” than “foe” or “poe”).

My travels and adventures are far too extensive to fit in the print version of the Quarterly, but will appear here soon in the unabridged version.  Check back to find out what happened when I asked for a “hot dog” in Viet Nam or my attempt to climb the “Stairway to Heaven” to see the Buddha.

Here are a few brief excerpts: 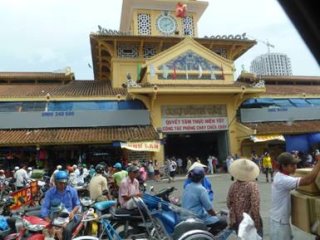 1. The wrap party for my Da Nang class was held at a local restaurant. When I arrived, all the students were there, seated at a long table. I was greeted by a large poster with my picture, and my name spelled correctly (unlike China, where a large red banner read “James Tanen Baum” and my exhibitor’s badge had yet another misspelling).

This dinner lasted much longer than the one in Ho Chi Minh City, with courses separated by just enough time that I was never sure if there would be another one.

Finally, the meal was over, but I wasn’t taken back to my hotel. Oh no, now there was going to be a “Karaoke Party.” My protests that I only worked “behind the microphone” were to no avail. The karaoke unit did have songs with English lyrics, but the remote control was malfunctioning, and even with repeated banging by the operator, it failed to produce any songs I was even remotely familiar with. I had to make do with an a cappella rendition of…

2. My teaching style was “foreign” to the students in several ways. I use elements of Zen in teaching, and also real-world examples to aid in understanding what would otherwise be sterile academic concepts. 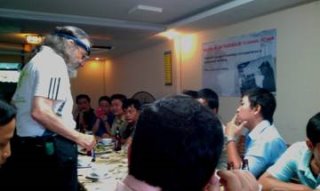 “Imagine you are at the beach, and the tide is coming in. If you stick a surfboard in the sand and stand behind it, will your feet get wet? Of course they will, because the water will simply wash around the narrow obstacle, just like low-frequency sound will. And when the waves crash against the board, they will knock it down even if you try to hold it upright, just as low-frequency sounds will push and pull on a flimsy wall to pass through it. (Actually, the original sound waves will be stopped by the wall, and new ones generated on the other side, but you get the idea.)

“Now imagine that kids are throwing rocks at you. Will the surfboard protect you if you hide behind it? Yes, because it can easily stop the small rocks, which cannot go around it, just as the small highfrequency sound waves are blocked. And you can hold the board upright when the rocks hit it, just as even a lightweight wall will stop high-pitched sounds.

This not only teaches about acoustic shadows, but also gives the students the meta-knowledge to handle any specific noise infiltration problems I haven’t mentioned in class, when they are out shooting in a practical location.

3. Sunday was my last day in Viet Nam. I chose to walk south from my hotel, rather than north as I had the Sunday before. I wanted to check out the large lake near the hotel, and the interesting bridge and island temple. 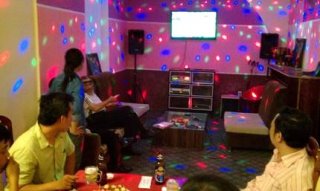 On the way there, I stopped at a small park with a large statue. There are many of these scattered throughout Na Noi and other cities. While I was taking pictures, a young woman approached me with large sack of what had to be tourist merchandise. I motioned her away, but she was persistent. She thrust a “Viet Nam” cap at me and waved it. “How much?” I asked automatically.

“That’s too much. No thank you.” I went back to my picture taking.

She was not to be gotten rid of that easily. I should never have spoken English. Usually I speak gibberish (“bohg pretzam etza eesh”), because these peddlers know a great many languages well enough to be a nuisance. But I was distracted watching kids on skateboards with only a single wheel fore and aft, and spoke without thinking. (Maybe they have these two-wheelers in Los Angeles and I never noticed.) She removed other colors of caps from her bag. I had seen them in stores and from other street vendors, and the going price was $5 American … after you haggled them down from $20. 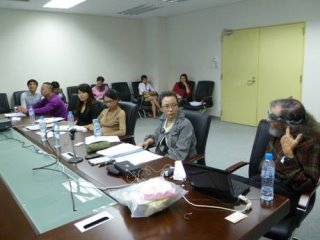 “How much you give?” Never, never, speak a recognizable tongue to a street vendor.

“Too little. You give me 100,000.” She opened and closed the cap’s Velcro strap to demonstrate this valuable feature.

“What color you want?”

I picked out a red one, checked to see if the seams were good, and stuck it in my (very large) pants pocket. I deliberately paid her with small bills, which I keep in a separate place from the big ones like 200,000s or 500,000s. 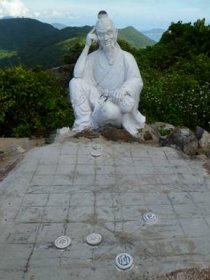 Never, never, never buy something from a street peddler. She held out the remaining caps.

“You buy more.” It was not a question.

“No, I have only one head.” She didn’t get the joke. She put the caps back and drew out a stack of guidebooks for various Vietnamese cities. In English, but I’m sure her sack held copies in all the major languages. But even at a distance I could see they were bootleg photocopies. I spread my hands out. “No thank you.” Postcards and picture books were next.

I gave up and walked away. She followed me for a quarter block, calling out “CD … DVD … SIM Card,” then went back to her spot in the park, like a spider in the center of its web.